Various pages on the social networks, conscious or unaware of the effects the content they post or share daily, are contributing in spreading hate-speech, particularly toward disadvantaged groups. Three Italian Facebook pages, “Aprite gli Occhi” (open your eyes), Questa e l’Italia (this is Italy); Piovergovernolado (an idiomatic expression to blame politicians and especially the government) are targeting the Roma population in Italy posting and sharing inappropriate content fueled of stereotypes and prejudices. Since the beginning, Facebook has been playing an important role in people’s life, drawing them closer, giving them a space to express themselves and even shaping both their sentiments and behavior. Facebook core values and policies aim to provide a safe and respectful virtual place to users, avoiding hateful content and violence. However, much of the content surfing online contributes to the magnification of hate speech and seem to be unchallenged. Current policies have shown inefficient to tackle the roots of the problem due to the limitations they have, although some many available options. Unquestionably, hate speech might be a starting point contributing to irrevocable consequences. Roma are either unjustly used as a scapegoat to blame for the economic and social crisis or to confirm negative stereotypes. Therefore, this is a pivotal issue to be discussed in the public discourse and have the attention of the relevant factors such as Facebook and the Italian government in particular to respond effectively to online-hate-speech. 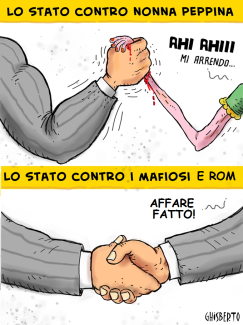 “Aprite gli Occhi” (open your eyes), Questa e l’Italia (this is Italy); Piovergovernolado (an idiomatic expression to blame politicians and especially the government) Daily, are posting and sharing inappropriate content based on stereotypes and misperception toward the Roma and other social categories. Probably, unconsciously of the hostile content and the possible terrible effects of such rhetoric. They are blaming crosswise the Roma and mostly immigrants and refugees coming from African countries for contributing in worsening the economic, political and social situation of Italy and dishonoring the Italian values and culture. According to them, the government is spending the taxes to support liberal leftist policies in order to integrate the Roma. In this way, these pages are turning the Roma into scapegoats for the mainstream problems currently in Italy, for instance, the economic crisis, the European Union policies, unemployment, and criminality.

Facebook plays a remarkable role in shaping people’s opinions and ideas and has the power to influence their behavior. The level of participation on Facebook has been more and more intensive. People share their daily life, thoughts, opinions and even attempt to persuade their norms and beliefs to others. The magnification of hostility, stereotypes, and prejudices has always been the starting point of exclusive policies, racial profiling, discrimination, prosecution and even atrocities against the dignity and life[1].

Actually, the issue is more complex. These pages use a populist tone, at the same time embracing the rhetoric tone of nationalists’ politicians. Therefore, the content of many of the posts are politically loaded and geared toward populism. Along with this line, some of the posts indicate a dichotomy of the Italian people on the one hand and the government, on the other hand, clearly a populist move to point out two different entities, one in the position of the subordinated and the other in the position of the predominant. Hence, the language is articulated vaguely against the Roma, denoting a second-hand importance. In sum, the main focus is not explicitly the Roma, rather than the dissatisfaction against the government and the elite that makes these pages give the impression of populism. However, often the Roma appear in the headlines, and the comment section counts tens of grudge reactions.

The hate-speech against Roma has its root causes on the long-term discrimination based on race, and ethnicity. Populist politicians especially the right-wing populist and the mainstream media are over heightening the racist tones against the Roma. The content found in these pages are not solely the memes, slogans, or quotes from the fan page managers. Considerably, the content reflects the ideology of various public figure such as politicians. Eventually, news from the media are interpreted and mispresented to worsen the role and image of the Roma community. 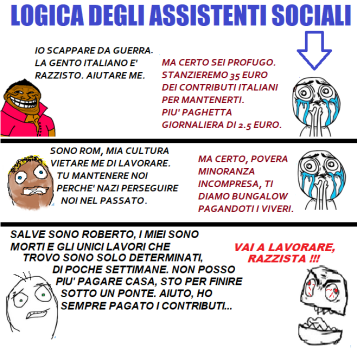 People that adhere to this ideological line and engage in similar discussions on Facebook pages agree and support this rhetoric. Especially, when they assume that Roma immigrants coming from EU countries and the Italian Roma will evoke financial burden on the taxpayers, and cultural discrepancy. In addition, these issues are buzzing in the Facebook space. Therefore thus, must be brought in the public discussion and in the attention of the policymakers, based on the fact that these pages are manipulating and abusing with the image of Roma in a slippery way.

At first sight, the content looks like an objective reporting, or an unbiased free expression of a political view, a political demand or the page’s opinion on the outlandish Roma lifestyle. Moreover, dissatisfaction and irritation regarding the illegal occupations of abandoned spots by the Roma[2]. Hence, strengthening the stereotypes and demonizing the Roma community as an unsuitable ethnic group, troublemakers and contagious problem that needs to be solved.

Taking into account the comment sections, most of the people agree with the allegations and the language loaded with disgust and severe disdain. In spite the disdain, commenters are few steps ahead in expressing hostility, and loathing. They even recall past events of Roma extermination during the Holocaust as a good solution against them[3]. Furthermore, these pages fed their fans with a nationalistic propaganda against whoever is depicted as a foreigner, including the Roma.

Hate-speech is a real phenomenon, it is defined as a communication that denigrates people on the basis of race, color, religion, ethnicity, sexual orientation, and gender. In addition, it can fuel discrimination and hostility in the off-line life. Moreover, it induces or foster intolerance, spread, spur and justifies any form of hatred.

There are real-life examples in the present and well in the past of hate speech language incur deadly outcomes. During World War II, thousands of hundred Jews and Roma were persecuted, tortured, and exterminated in gas chambers, or shoot on the spot, mostly in the death camps. Certainly, these terrible events did not take place suddenly. Initially, much years earlier they were demonized first, considered as antisocial, blamed at the time, or racially impure in the case of Jews. Subsequently, segregated and lastly sent to death. Another example recalls the massacre in 1994 of 800.000 Tutsis and Hutus in Rwanda, where is widely believed that hate speech played a significant role.

Hate Speech has some dangerous psychological consequences, wherein the right of dignity is not respected. Firstly, it inflicts on the victims a vibe of self-hatred. Secondly, has serious effects on children. They will come to question their own identity and feel worthiness. Besides, it promotes racist beliefs that lead to radical acts of violence, terror, sow fear till hate crimes of mutilation and killing.

This meme aims to tell to the audience that the Italian are always left in the end although they have paid taxes.

Based on the content these pages provide, there are three underlying causes that explain such attitude. Firstly, the Roma are used to confirm negative stereotypes, portrayed as the protagonist of violence, thieves, spongers, and campsite occupiers. All this is defined both as part of Roma culture and misconduct because of their ethnicity. Both, the Pages and the commentators agree and criticize the government that according to them is not reacting, and does not punish, on the contrary, provides support and protection to Roma. Secondly, the struggle for material resources at times of economic crisis, unemployment, and political corruption. The pages and fans claim that the Roma, and the foreigners are more privileged than the Italians. According to both, this is an unjust favoritism and paid by their taxes. Thirdly, the populism reflected by both the pages and public figures express an overall dissatisfaction against the governance, globalism, and the European Union, which is inevitably targeted to Roma people too.

The Italian legislation has a firm anti-discrimination legislation that condemns to imprisonment those who spread of race superiority and inferiority. In Italy, hate-speech covers all forms of expression which aim to spread and justify racial hatred and xenophobia. However, Italy does not have any specific law devote to online hate-speech.

To tackle the situation I would suggest some policy options, at the same time, describe the limitations.
Firstly, keep the status quo which are the actual Facebook policies. Some of Facebook core values are, be open and build social values. Hence, it believes that a more open world is a better one, people should have access to information that helps to make better decisions and have a greater impact. A milesone point is to build social value, Facebook exists to make the world more open, and draw people closer to each other in a multicultural virtual environment[4]. Therefore, Facebook has a policy pack that guides and surveilled the content whether is respectful or violates the norms of the Facebook community and policies. Even though, the racial discourse through Facebook posts, shares and comments on various groups and pages remain still unchallenged. People have a different understanding of hate-speech. The language in these posts is articulated in a way that dodge hate speech definition. As mentioned before, the focus of these pages is the government, religion, and the elite.

Secondly, the establishment of an effective legal and institutional framework for responding to Facebook hate speech. This legal action is seen as a mechanism that works independently and asks Facebook to remove hate speech content within 24 hours, or within 7 days the less obvious. However, it is a challenge to clearly define what a less obvious online hate speech content is. In addition, Facebook will not be willing to have an overlapping monitoring system, and a set of standards.

Thirdly, law enforcement against discrimination and xenophobia, and make punishable the online hate speech. Facebook pages as public spaces must take responsibility, and be accountable in front of the law, regarding of what they share based on the legal framework mentioned above. Anyhow, it will infringe freedom of expression, affects the personal liberty of self-fulfillment, and the right to express themselves although it might be offensive. In addition, how would we guess what people really think about the Roma and other groups?

The legal and institutional framework should operate to tackle online hate speech, however, it should not aim to punish either the fan pages neither the commentators. On the contrary, it should monitor and keep track on the online hate speech trend and work upon the root causes. The Italian legislation should sanction or amend the actual law of hate speech into online speech too. Thus, establishing an office that deals with such cases, but the core purpose should be to educate and raise awareness on the importance of such issues.

Features of online anti-Roma rhetoric on the Facebook pages.

More on Roma in Italy?

Here is the  link to our Mundi Romani film about Italy:
https://www.youtube.com/watch?v=IuudUi86x60