Segregation of Roma in education – through my Roma eyes

Roma and their position in education is a very broad, multifaceted topic, which could be addressed by a variety of angles. This blog article will not aim at covering fully this issue, but rather, it is inspired by some personal experiences of the past.  When I was a student I was part of project which aimed at enrolling Roma children wrongly placed in special schools into mass schools. Scientific literature and policy documents attribute various reasons to the wrong placement of Roma kids in special schools. To put it plainly, while working to end segregation of these Roma children in Bulgaria, I saw an overwhelming amount of discrimination, ignorance and racism on behalf of decision makers and stakeholders. It seemed as if Roma pupils were invisible for the education system and in the moment we started to ask for their rights they become unwelcome everywhere. Although we succeeded in enrolling them, and we made sure to spend time studying with them to guarantee them the same start as the rest of the class, in the end they just became unwelcome “guests” in the classroom, where nobody wanted to see them. Probably as a consequence of the hostility and exclusion they were faced with, some of them “disappeared” shortly after their career in the “integrative school system” started. 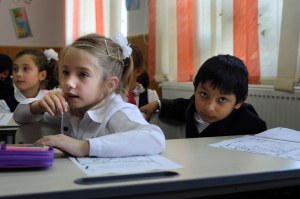 The Decade of Roma Inclusion started in 2005 but after these years when integration was officially put on the agenda of European countries, we still read reports and articles about the similar problems we start with. Somehow these problematic issues manage to stay “evergreen” – with the quandary of segregated education being one of them.  Roma children are segregated either by being put in schools for children with special needs or mentally disabled, or in “Gypsy” schools and classes. While examining the background of the problem, we need to go a long way back in time and need to focus on several different European countries.

The Open Society Foundation published a document in 1998 which gave a comprehensive overview of the situation of Roma in the education system in Europe. The authors relied also on the European Roma Rights Centre report from the same year when investigating the roots of Roma segregation in education.  As they describe, in the 18th century policies were drafted to “Christianize” the Roma and transform them into “new citizens” and “farmers”. To achieve this purpose, Roma children were removed from their families and placed in non-Roma ones. Parallel to them being uprooted from their family, they were also placed in mass schools together with non-Roma kids, where they were supposed to lose their differences – this severely questionable method was aimed at what would be today called assimilation. Policies for assimilation became more prevalent after the Second World War when governments took action forcing traveler Roma communities to settle. The school system for Roma children was created to remove children’s “Romanipe”: in other words, education was aimed to assimilate children in mainstream society, and make them forget about their culture, traditions and language. The justification was that Romani cultural background was a mere social disadvantage that made children unable to perform properly in mainstream education, and thus it had to be replaced with mainstream traditions.[2] 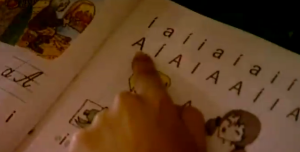 The same document contains information about the situation until 1998 with the Roma special schools, explaining the result with the language barriers, cultural barriers which are bringing the Roma pupils most of the times in classes or schools not preparing them equally as the non-Roma. Often times they are even considered because of their ethnic identity as mentally handicapped children and they are placed in special schools for that.  Sadly the situation today in some European countries is that they are not handling the problem in a different way when we still have the same practice existing.

The OSF article dates the segregation of Roma kids in Hungary back to the since 1960s when the Socialist Workers Party created the category of the “socially deprived” or so called “C-classes”, for children on the lowest (“C”) level of school performance. In 1971 they were announced as predominantly Gypsy. 70 “C”classes started up in 1962, and their number increased to more than 180 by 1971. The concept and practice of the so-called C-classes was (and is, to some extent) adopted in many other European countries, like Czech Republic, Slovakia, Romania, Bulgaria, Serbia or Macedonia.[3]

My personal experiences link my knowledge about the issue to Bulgaria primarily. The ERRC published an article in 2000 shading light on the situation of Roma children in the Bulgarian education system. In comparison to Hungary, Bulgarian authorities chose a form of segregation which on the surface appeared to be less discriminatory than the C classes in Hungary. After the 1950s new schools were built in Roma settlements, parallel to the decision of the government to adopt laws to forcibly settle nomadic and semi-nomadic Roma. Since the 1960s these segregated schools haven’t changed much. Until 1999 an estimated 70% of the Romani children in Bulgaria attended such schools, where the quality of education is generally lower than in other non-Romani populated schools. The ERRC document addresses another, even heavier form of segregation in education, namely wrong placement of Roma children in special schools for handicapped or mentally disabled. IN such schools, according to the 1995 investigation, “approximately one out of every three pupils was Romani”. In 1999 there were 274 special schools in Bulgaria. The percentage of Roma children in them was 70%. [4] 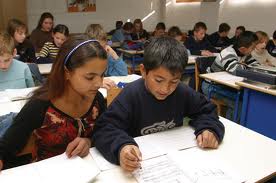 Since 2000 changes occurred in the countries of Central and Eastern Europe. We have several steps made by international institutions, NGOs and some “political will” on the governments’ side was expressed for solving this problem. The first Decade of Roma Inclusion (2005- 2015) gave funding opportunities to a lot of non-governmental organizations, and projects and initiatives were started. However, the result sadly wasn’t enough so far. The lack of an overarching change may be due to the fact that the agenda of the Decade was initiated by the civil society and some basic initiatives did not achieve sustainability.

The UNDP, the World Bank and the European Commission released a survey entitled “Roma Education in Comparative Perspective” which presents a large pool of information about the problem from different angles. As we can see below, the figures show that we already have some improvement in both areas of segregation: placement in special schools and segregation openly based on ethnicity. But unfortunately in some of the countries (such as Croatia), the proportion of Roma children in special schools grew. Which shows that we still have long way until we completely solved this problems. [5] 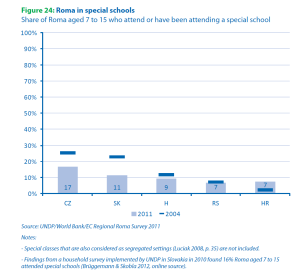 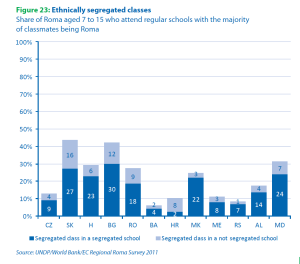 As a consequence, in 2011 27 Member States were asked to create their national strategies in four key fields of the First European Framework for National Roma Integration Strategies, adopted by the European Union, to enter into force from 2014 on. One of the four areas is education. Recommendations stressed severely by the EU include the removal of segregated schools. As a result 26 national strategies were submitted by the member states. As a result, the European Commission also adopted country specific recommendations.[6]

All these steps reflect the recognition of the problem that Roma face in education. The recognition is present on the international, the governmental and the civil society level as well. However, the solution is still quite controversial. One of the most constructive steps in my opinion was the adoption of the “National Roma Integration Strategies: a first step in the implementation of the EU Framework” in May 2012.[7]  The annex attracted is with country specific recommendations and if we look the education area we can easy find conclusions about the Roma education situation in most of the European countries today. Looking at the figure below it is evident that only some of the countries really took time to think about measures tackling the problem of segregation, however, for the majority of them addressing segregation was not among the priorities. 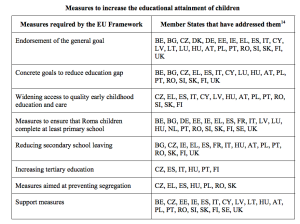 The Framework for National Roma Integration, along with the other strategies and documents show that the segregation and wrong placement of Roma pupils in “special schools” is still an existing problem, and not only in Central and Eastern Europe – however, segregation persists more heavily in this region. The current situation leads to another important question: what we can expect from the second Decade of Roma Inclusion when it comes to segregation in education? Are we going to find tangible solutions until 2020? Or actions will again mainly pertain to recognizing the problem over and over again? The answers for these questions are not easy to be found.

In some countries the victims of segregation ad wrong placement themselves took action against their countries’ policies. In the 29th of January 2013 ERRC published an article about a decisive stance the European Court of Human Rights took in connection to the problem. The European Court ruled in favor of two applicants, Horváth and Kiss, against the Hungarian state, stating that their placement in the special school was based on their ethnicity, not for their reasonable need. Their right to education was harmed, which made their integration in society more difficult.  In its decision the Court underlined the long history educational segregation of Roma children in Hungary and it stressed that the state should abolish this practice as it’s violating the European Convention on Human Rights, read in conjunction with Article 14 (Prohibition of discrimination). The Court also recommended that not only Hungary but all the State Parties should develop positive measures to avoid discrimination.[8]

Similar cases from Greece[9], Czech Republic, and Croatia[10] have been in front of the European Court before the case of Hungary.  The case from Czech Republic relates back to 2000 and it was the first case where the victims themselves, 18 students from Ostrava, claimed that they received inferior education based on a diluted curriculum when they were placed in a special school. They even submitted an extensive research indicating that Roma children were systematically assigned to segregated schools based on their ethnic identity and not on their intellectual capacities. In 2006 the decision of the Court stated that although the applicants had raised very strong arguments, they didn’t reach to a violation of the Convention and specially Article 2 and 14. But on the Grand Chamber in a landmark there was the decision ruled in favor of the applicants, acknowledging that they suffered from discrimination.[11] 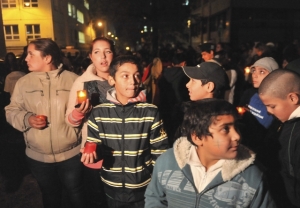 Examining the problem from my Roma perspective, starting a desegregation process is still the needed minimum in many countries, but it is not enough. Looking back at my own school years, I didn’t face the same problems like many of the Roma in Bulgaria, whose mother tongue was Romanes and have a strong Roma identity. On the contrary, I was “lucky” enough to be part of a family who had been assimilated long ago: my ancestors lost their Roma identity and so there was nobody to really transmit this sense of belonging to me. Still, I felt many things missing during my education. I missed classes where I could have the possibility to learn my Romani language and Roma history as mandatory; I missed knowing my place in the world, because of the educational system that did not address cultural differences in the curriculum and the structure. My example shows that eliminating segregation and wrong placement practices is more than necessary, but without any other action taken, the final result would only lead to assimilation. The educational system should change and create a place for us, Roma in the schools in a way that helps making us part of the society, but not demanding that we lose our Roma identity in the process of making statistics on education look slightly better.