On a sweltering summer evening, as the River Danube sparkled in the sun, more than 1500 people came to remember the victims of the Roma Holocaust. Ambassadors, artists, activists, religious leaders and musicians gathered along with hundreds of ordinary Roma at Budapest’s Nehru part to commemorate the murder by the Nazi regime of more than 500,000 Roma during the Second World War.

Roma Holocaust Day was a poignant mixture of solemn remembrance of the dead intertwined with a celebration of Roma life and culture. Held every year on August 2 to reference the murder on that date in 1944 of 2900 inmates of Auschwitz’s “gypsy camp” on the orders of SS chief Heinrich Himmler, the event proved how a tragic past can inspire a hopeful future.

Australian Ambassador John Griffin, his Israeli counterpart Ilan Mor and representatives from the US, Belgian, Bosnian-Herzegovinian, French and Swedish embassies were among a crowd that heard repeated calls for the victims of the Roma Holocaust never to be forgotten. The ceremony in Budapest was only one of many that took place across Europe in cities such as London, Berlin, Paris, Bucharest, Dublin and Strasbourg. In Hungary alone, more than 100 similar events were staged in small towns and villages.

In a message read by a representative, Hungarian president Janos Ader called the Roma Holocaust “unimaginable.” He said the genocide of Roma stood parallel to the Jewish Holocaust. The president expressed solidarity with the Roma, and that lasting peace for the martyred should exist side by side with continuing peace for all.

Several speakers emphasised the need to overcome denial of the Roma Holocaust. Romani elder and activist Agnes Daroczi said the Roma genocide was never spoken of with the same emphasis as the Jewish tragedy. She urged better education of people everywhere about the Holocaust and supported ongoing dialogue between Roma and Jewish survivors and advocates.

Budapest chief rabbi Shlomo Koves said all victims of the Holocaust were equally important. He stressed the significance of all people who feel threatened because of their ethnicity being able to fight and overcome their fears. 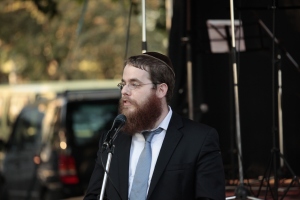 Romani religious leader Benedek Csik attacked Roma Holocaust deniers. “Tell the people of Hungary and the world the whole truth,” he urged. “Governments and the European Union need to make sure the story is understood.” 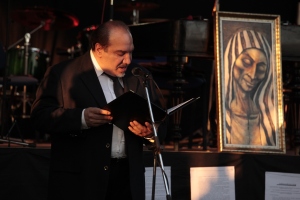 Romani artist Istvan Szentandrassy explained that he had just finished a painting about the Holocaust even though it had not been a good experience for him. He called for all Roma to construct an artistic concept of the Holocaust as a way to better understanding it. “Every person should paint a picture about the Holocaust,” he said.

Renowned Hungarian Romani musician Guszti Bodi was convinced Roma Holocaust Day was important for both the past and the future. “Remembering what happened is essential to allow Roma to survive now,” he said. “But the future will be very difficult. Many famous writers, artists and musicians are trying to improve the image of the Roma, to overcome so many negatives that we face. This is our mission.”

Performers at the event included other famous Romani musicians such as Laci Gaspar and Szilvasi Gypsy Folk Band.

Wreaths were laid at the Roma Holocaust Memorial in memory of the victims by representatives of those embassies attending the event as well as Mr Ader, the Hungarian Human Resources Ministry and numerous organisations and individuals, including Romedia Foundation. 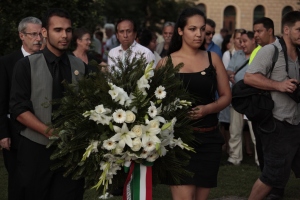 Wreathes were laid in memory of the Roma Holocaust victims. Photo: Romedia Foundation

As dusk slowly settled and speeches gave way to music and poetry, the mood was reflective but coloured with hope that out of such a terrible event as the Roma Holocaust, positive change and common good may eventually come. 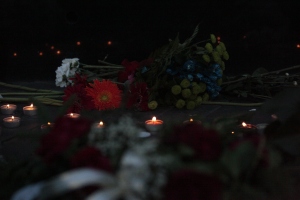